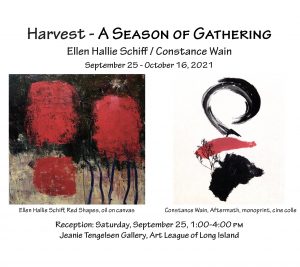 The Art League of Long Island announces the re-opening of the Jeanne Tengelsen Gallery with an exhibit, “Harvest – A Season of Gathering” featuring works by Constance Wain and Ellen Hallie Schiff. The opening reception takes place on Saturday, September 25 from 1:00pm to 4:00pm. The exhibition is on view through October 16.

Related by family and dear friends as well, Wain and Schiff often find common ground as teachers.  “Even though we as artists differ in our choices of subject matter and materials in our individual work, we both show evidence of an experimental attitude. This has been an important component that we both use as teachers in communicating to our students.”

CONSTANCE WAIN’s varied work, covering more than four decades, reflects early and later influences, often in series. Her materials range from dry lithography through mixed media, and concepts have included personal and universal concerns: the natural world, human condition and inner reflection. Her art therapy training at Pratt has affected her process, as well as the use of symbol and metaphor that is prevalent in her work.

She has received positive reviews from art critics and curators. Lynda Hammes, in a review from Newsday, described her as “a versatile artist, a creator of monumental images with a mythic, mysterious quality”. Phyllis Braff in the New York Times described “The Silent Hope” as “daring and mind stretching…. capturing that vague area between art and life.”

She has served on the faculties of the Art League of Long Island, School of Visual Arts, Hofstra Graduate Creative Arts Department, East Islip School District and is currently the art instructor for the Town of Huntington, Senior Division. She was also an exhibiting member of the BJ Spoke Gallery in Huntington and is currently a member of the Long Island Craft Guild.

ELLEN HALLIE SCHIFF is an Abstract Process Painter. She began painting at age 45 when the need for a creative outlet became insistent in her life. A psychic told her to paint and that is exactly what she did. Her life was transformed from then on. “I appreciate the visceral, emotional and monumental quality that embraces the accidental in my work. The result is a snapshot of an authentic moment always trying to get closer to a “truth” that is just beyond reach”.

This past year Schiff’s work was in the Heckscher Museum 2020 Long Island Biennial; a Group show at the Silvermine Arts Center in Connecticut; a Group show at the Flatiron Project Space in New York; and her work has been on exhibit at the Alfred Van Loen Gallery in the South Huntington Library June 19 through September 17, alongside that of Stan Brodsky, Ty Stroudsburg and Deborah Katz. Schiff’s work is also featured on the TV drama, “The Good Fight” and was previously featured on “The Good Wife”.  Schiff is on the Art Advisory Council of the Port Washington Library and teaches Abstract Painting at The Artist’s Studio in East Norwich and The Art Guild in Manhasset.  She is represented by karyn mannix contemporary on the East End of Long Island. Learn more about the artist at www.ellenhallieschiff.com.